The Taccle AI project on Artificial Intelligence and Vocational Education and Training, has published a preprint  version of a paper which has been submitted of publication to the VET network of the European Research Association.

The paper, entitled  Digitalisation, Artificial Intelligence and Vocational Occupations and Skills: What are the needs for training Teachers and Trainers, seeks to explore the impact AI and automation have on vocational occupations and skills and to examine what that means for teachers and trainers in VET. It looks at how AI can be used to shape learning and teaching processes, through for example, digital assistants which support teachers. It also focuses on the transformative power of AI that promises profound changes in employment and work tasks. The paper is based on research being undertaken through the EU Erasmus+ Taccle AI project. It presents the results of an extensive literature review and of interviews with VET managers, teachers and AI experts in five countries. It asks whether machines will complement or replace humans in the workplace before going to look at developments in using AI for teaching and learning in VET. Finally, it proposes extensions to the EU DigiCompEdu Framework for training teachers and trainers in using technology.

The paper can be downloaded here.

Writing in Social Europe she says:

Education plays a crucial role in shaping this understanding and in making digitalisation inclusive. Although better services—such as services used remotely—make life easier also outside cities, the benefits of digitalisation have so far mostly accrued to an educated fragment of citizens in urban metropoles and one of the biggest obstacles to the digital shift is lack of awareness of new possibilities and skills.

Kampula-Natri draws attention to the Finnish-developed, free online course, ‘Elements of AI’. This started as a course for students in the University of Helsinki but has extended  its reach to over 1 per cent of Finnish citizens.

Kampula-Natri points out that in the Nordic countries, the majority of participants on the ‘Elements of AI’ course are female and in the rest of the world the proportion exceeds 40 per cent—more than three times as high as the average ratio of women working in the technology sector. She says that after the course had been running in Finland for a while, the number of women applying to study computer science in the University of Helsinki increased by 80 per cent.

Last week I wrote about projections of future demand for Science, Technology, Engineering and Maths (STEM – or in Germany – MINT) occupations. I suggested that predictions of skills shortages were overstated.

The same applies to computer programmers. According to the European Commission, “many vacancies for ICT practitioners cannot be filled, despite the high level of unemployment in Europe. While demand for employees with ICT skills is growing by around 3% a year, the number of graduates from computing sciences fell by 10% between 2006 and 2010.

If this trend continues, there could be up to 900 000 unfilled ICT practitioners’ vacancies in the EU by 2015.”

This is not the first time the European Commission has predicted skills shortages for ICT practitioners. Prior to the Millennium bug, there were once more predictions of a massive shortage of programmers. And I suspect, with a little internet searching, it would be possible to find annual predictions of skills shortages and unfilled vacancies, especially from industry lobby bodies.

One reason for this, I suggested in my previous article, is that the ICT industry has an interest in keeping wages down by ensuring an over supply of qualified workers. In this respect, a report last week on the size and value of the apps industry in Europe is interesting. The  report published by industry trade body ACT, claimed that there are currently 529,000 people in full-time employment directly linked to the app economy across Europe, including 330,000 app developers with another 265,000 jobs n created indirectly in sectors like healthcare, education and media, where apps are increasingly prominent.

At first glance then, this is a rosy area for young people with a good future. But digging deeper into the data suggests something different. According to the Guardian newspaper, “In the UK specifically, the report claims that 40% of organisations involved in developing apps are one-man operations, while 58% employ up to five people. It also points out that 35% of UK app developers are earning less than $1,000 a month from their work.”

1000 dollars a month is hardly a living wage, let alone a sufficient level of remuneration to justify the expense of a degree course. However this does not discourage the industry group who amongst other measures are lobbying the European Commission to strengthen the single market and develop “a flexible and supportive business environment for startups and entrepreneurs.” In other words, more deregulation.

There are a number of problems in looking at skills shortages in this area. My suspicion would be that although the numbers graduating from computer science have fallen, graduates in computer and ICT related courses has risen. And demand for ICT practitioners covers a wide range of occupations. Rather than increasing the number of computer science graduates, more useful would be to ensure that ll graduates are skilled in designing and using new technologies. Of course developing such skills and competences should start at a much younger range. It is encouraging the ICT has been included in the primary school curriculum in England from next year.

The EU policy on future employment is based on the idea of job matching – of trying to match skills, qualifications and vacancies. Of course this does not work. What they should be doing is looking at prospective competences and skills – at giving young people the educations and skills to shape the future of workplace3s and employment. That could include the ability to use technology creatively in a socio-technical sense. But of course that would not suit the various industry lobby groups who are more concerned with protecting there profits than shaping the future of our society.

Jen Schradie, a doctoral candidate in sociology at UC Berkeley
Center for New Media, has analyzed data from more than 41,000 American adults surveyed between 2000 and 2008 in the Pew Internet and American Life Project. She found that college graduates are 1.5 times more likely to be bloggers than are high school graduates; twice as likely to post photos and videos and three times more likely to post an online rating or comment.
But perhaps most significant is her finding that class is likely to be the major determinate in online participation 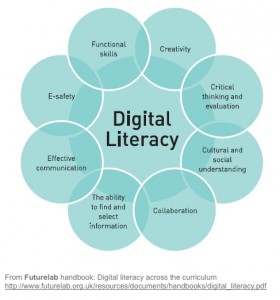 The definition of digital literacy is constantly evolving with a steady movement away from technical competences to an understanding based on social interactions. I like this latest interpretation from the Futurelab Handbook: Digital literacy across the curriculum (via Matt Lingard). However I wonder if there aren’t a couple of things missing. First is the issue of digital identities. Of course you could say that digital identities is all of the above. Bu8t I think that at the present time the ability to manage digital identities is one of the most critical issues facing young people. And I wonder if sharing should also be there. Sharing is a little differejnt than collaboration. Knowing what to share with who and for why is key to understanding the use of the social web.

Finally I wonder how long we can persist with the term digital literacy. The use of technologies is becoming so intertwined with young people’s daily life that it may be said to be just a part of literacy. Perhaps the only reason to persist with the distinction is to help the education system catch up in their understanding of this.