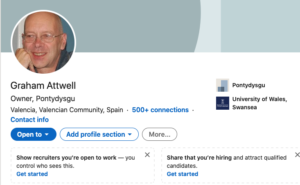 LinkedIn is the most boring but probably most useful social network I belong to. I can’ say though I am very interested in spending a lot of time embellishing my professional profile. And I guess its the same for a lot of other people. I guess thats why LinkedIn has developed an algorithm which they offer to write a summary of your profile for you, based they say on “your accomplishments.”

And although a bit gushing, I decided that the AI version of me was not too embarrassing to add to my profile. Here you go:

I’m passionate about providing a quality education, to improve learners learning and to empower teachers. As an experienced L&D professional I have a wide range of skills which can be utilised in all areas of education but particular skills in: Learning Technology; Education; Assessment Systems development for educational providers; Educational Policies & Procedure writing and review. My experience in both the public and private sectors as well as my background in Further Education has provided me with a vast knowledge base to support staff and students on the whole. The combination of these experiences would be invaluable and useful within any educational institution or company.

Yesterday I attended a webinar organized by the UK Association of Colleges in their Labour Market Observatory Series. The subject of the webinar was Using Job Posting Analytics to understand the changing Covid-19 labour market.

Understanding labour markets is a hard job at the best of time and the Covid-19 pandemic and the resulting lockdown have disrupted the economy with unprecedented speed and scale. As Duncan Brown, Senior Economist from Emsi, explained, raditional labour market statistics take time to emerge, especially to understand what’s going at regional and local level, and real-time indicators become all-important. Duncan Brown, talked through what their Job Posting Analytics – derived from collecting (or scraping) around 200,000 new, unique job postings from job boards across the internet every week — can tell us about where and how the labour market is changing and what to look for as we move into the recovery.

First though he explained how the data is collected using bots before being cleaned and duplication removed, prior to using algorithms to analyse the data. He pointed out that there are limitations to the data derived from job adverts but compared to the time taken for official labour market data to emerge, for instance through the UK National Office of Statistics Labour Force Survey (LFS)job posting analytics can provide an almost real time snapshot view of the labour market, and is easily projected at a local level.

My notes on the webinar are somewhat patchy but here are a few take home points, particularly from a question and answer session that followed Duncan Brown’s presentation.

There was a huge fall in online job adverts in April and May with the lockdown – as high as 80 per cent in some sectors and localities. Since then there has been a steady recovery in the number of jobs being advertised online but this recovery is uneven between different sectors and different cities and regions.

As examples offers of employment in the food and hospitality. Industries remain dire and aerospace is also still badly hit. On the other hand, job advert volumes in manufacturing have substantially recovered and, perhaps understandably there is an increase in jobs adverts in health care.

There is considerable differences as to how far the volume of job adverts has recovered (or otherwise) in different cities. In general, it would appear that those cities with the largest percentage of office work and of commuters are doing worse: London in particular.

One area of the labour market that Emsi is focusing on is skills demand. They have developed their own skills directory, which Duncan Brown said, now contains over 3000 skills and are running a project funded by Nesta to see if these skills can be clustered around different occupations. Yet despite the so-called pivot to skills, he said there few signs that employers were. Moving away from the traditional emphasis on qualifications. However, qualification demands often did not appear in job adverts but rather tended to be assumed by both employers and job applicants. For instance, someone applying for a job as an accountant would presume that they needed formal qualifications.

Although there have long been predictions over the impact of automation and AI on employment, Duncan Brown said there was little evidence of this. His feeling is that, at least in the UK, the existence of relatively cheap labour in many sectors where it would be relatively easy to automate tasks, was a disincentive to the necessary investment. He thought that labour costs may have been kept down by immigration. He pointed to car washes as an example of an area where far from advancing automation had actually gone backwards.

The slides from the presentation and a recording of the webinar will be available from 27 August on the Association of Colleges website.

The Taccle AI project on Artificial Intelligence and Vocational Education and Training, has published a preprint  version of a paper which has been submitted of publication to the VET network of the European Research Association.

The paper, entitled  Digitalisation, Artificial Intelligence and Vocational Occupations and Skills: What are the needs for training Teachers and Trainers, seeks to explore the impact AI and automation have on vocational occupations and skills and to examine what that means for teachers and trainers in VET. It looks at how AI can be used to shape learning and teaching processes, through for example, digital assistants which support teachers. It also focuses on the transformative power of AI that promises profound changes in employment and work tasks. The paper is based on research being undertaken through the EU Erasmus+ Taccle AI project. It presents the results of an extensive literature review and of interviews with VET managers, teachers and AI experts in five countries. It asks whether machines will complement or replace humans in the workplace before going to look at developments in using AI for teaching and learning in VET. Finally, it proposes extensions to the EU DigiCompEdu Framework for training teachers and trainers in using technology.

The paper can be downloaded here.

Writing in Social Europe she says:

Education plays a crucial role in shaping this understanding and in making digitalisation inclusive. Although better services—such as services used remotely—make life easier also outside cities, the benefits of digitalisation have so far mostly accrued to an educated fragment of citizens in urban metropoles and one of the biggest obstacles to the digital shift is lack of awareness of new possibilities and skills.

Kampula-Natri draws attention to the Finnish-developed, free online course, ‘Elements of AI’. This started as a course for students in the University of Helsinki but has extended  its reach to over 1 per cent of Finnish citizens.

Kampula-Natri points out that in the Nordic countries, the majority of participants on the ‘Elements of AI’ course are female and in the rest of the world the proportion exceeds 40 per cent—more than three times as high as the average ratio of women working in the technology sector. She says that after the course had been running in Finland for a while, the number of women applying to study computer science in the University of Helsinki increased by 80 per cent.

Even before the COVIP 19 crisis and the consequent looming economic recession labour market researchers and employment experts were concerned at the prospects for the future of work due to automation and Artificial Intelligence.

The jury is still out concerning the overall effect of automation and AI on employment numbers. Some commentators have warned of drastic cuts in jobs, more optimistic projections have speculated that although individual occupations may suffer, the end effect may even be an increase in employment as new occupations and tasks emerge.

There is however general agreement on two things. The first is that there will be disruption to may occupations, in some cases leasing to a drastic reduction in the numbers employed and that secondly the tasks involved in different occupations will change.

In such a situation it is necessary to provide pathways for people from jobs at risk due to automation and AI to new and hopefully secure employment. In the UK NESTA are running the CareerTech Challenge programme, aimed at using technology to support the English Government’s National Retraining Scheme. In Canada, the Brookfield Institute has produced a research report ‘Lost and Found, Pathways from Disruption to Employment‘, proposing a framework for identifying and realizing opportunities in areas of growing employment, which, they say “could help guide the design of policies and programs aimed at supporting mid-career transitions.”

The framework is based on using Labour Market Information. But, as the authors point out, “For people experiencing job loss, the exact pathways from shrinking jobs to growing opportunities are not always readily apparent, even with access to labour market information (LMI).”

The methodology is based on the identification of origin occupations and destination occupations. Origin occupations are jobs which are already showing signs of employment. Decline regardless of the source of th disruption. Destination jobs are future orientated jobs into which individuals form an origin occupation can be reasonably expected to transition. They are growing, competitive and relatively resilient to shocks.

Both origin and destination occupations are identified by an analysis of employment data.

They are matched by analysing the underlying skills, abilities, knowledge, and work activities they require. This is based on data from the O*Net program. Basically, the researchers were looking for a high 80 or 90 per cent match. They also were looking for destination occupations which would include an increase in pay – or at least no decrease.

But even then, some qualitative analysis is needed. For instance, even with a strong skills match, a destination occupation might require certification which would require a lengthy or expensive training programme. Thus, it is not enough to rely on the numbers alone. Yet od such pathways can be identified then it could be possible to provide bespoke training programmes to support people in moving between occupations.

The report emphasises that skills are not the only issue and discusses other factors that affect a worker’s journey, thereby, they say “grounding the model in practical realities. We demonstrate that exploring job pathways must go beyond skills requirements to reflect the realities of how people make career transitions.”

These could include personal confidence or willingness or ability to move for a new job. They also include the willingness of employers to look beyond formal certificates as the basis for taking on new staff.

The report emphasises the importance of local labour market information. That automation and AI are impacting very differently in different cities and regions is also shown in research from both Nesta and the Centre for Cities in the UK. Put quite simply in some cities there are many jobs likely to be hard hit by automation and AI, in other cities far less. Of course, such analysis is going to be complicated by COVID 19. Cities, such as Derby in the UK, have a high percentage of jobs in the aerospace industry and these previously seemed relatively secure: this is now not so.

In this respect there is a problem with freely available Labour Market Information. The Brookfield Institute researchers were forced to base their work on the Canadian 2006 and 2016 censuses which as they admit was not ideal. Tn the UK data on occupations and employment from the Office of National Statistics is not available at a city level and it is very difficult to match up qualifications to employment. If similar work is to be undertaken in the UK, there will be a need for more disaggregated local Labour Market Information, some of it which may already be being collected through city governments and Local Economic Partnerships.